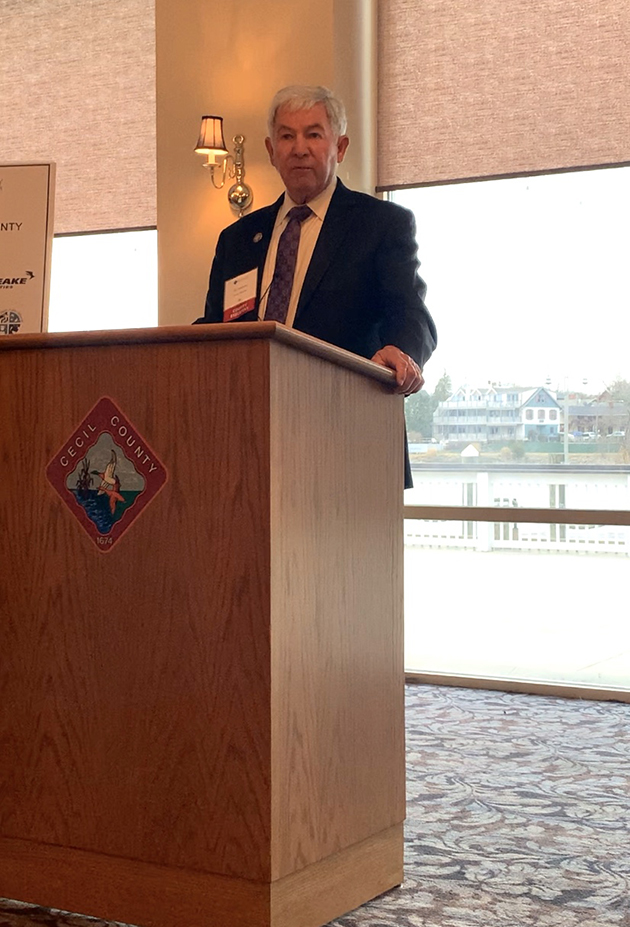 CHESAPEAKE CITY, MD. – More than one hundred and fifty citizens, including business and organization leaders, as well elected officials at the state, county and municipal levels, gathered to hear remarks by County Executive Alan McCarthy and Council President Bob Meffley at the State of the County breakfast forum on Monday at the Schaefer’s Canal House Ball Room, Chesapeake City.

Both the County Executive and the Council President thanked the members of the County Council for their service and agreed that working together in a collaborative manner, had in the past and, would in the future, produce positive results.

Financial Stability
With three consecutive years of balanced budgets devoid of using the unassigned fund balance, the county executive expressed the importance of two established reserve accounts: the Budget Stabilization Reserve and the Emergency Reserve. The reserves serve as safeguards for unforeseen emergencies or budget shortfalls.

Solid Waste continues to be a self-sustaining enterprise fund and operate in the black, while Wastewater is working to close the gap between revenue and expenditures, as a result of recommended and council-approved rate increases.

As a result of stabilizing the budget through the use of sound financial practices, Dr. McCarthy reminded the audience that there have been no tax rate increases the past two years, and that he would not seek any tax rate increases next year associated with his proposed FY 2021 budget. The county executive will deliver his budget to the County Council on April 1, 2020.

Economic Development
Noting $2 billion in capital investments established in Cecil County in the last three years, including 6 million square feet of new business sites, the county executive expressed the importance of establishing a commanding economic presence. The addition of 4,000 new jobs in the county has assisted in a 30% drop in the unemployment rate in the past three years.

This economic development and growth has contributed to a surge in residential building permits -- an increase of 33% in 2019.

Dr. McCarthy commented that commercial and industrial expansion, though robust, remains confined to the growth corridor, therefore preserving the intent of the County’s Comprehensive Plan to maintain our agricultural and rural integrity. The Comprehensive Plan was prepared by the citizens and adopted by the elected county government in April 2010.

Infrastructure
The county continues to upgrade current wastewater treatment facilities, and replacing two newly-constructed wastewater plants. These enhancements will improve public health and safety, and assist in the clean-up of the Chesapeake Bay and its tributaries.

New infrastructure investments in the installation of wastewater infrastructure on Route 40 from Elkton to North East will stimulate commercial/industrial growth and improve the health of our County as well.

The county executive emphasized his desire to make road maintenance and repairs a top priority in the coming year with the recent assignment of $3 million, as approved by council in late December.

Safe, Healthy & Active Communities
Providing additional resources to support the Sheriff’s Office and the State’s Attorney’s Office (SAO) has resulted in a more effective and efficient operation for both entities. Dr. McCarthy cited the leadership of Sheriff Adams and State’s Attorney Dellmyer as critical to ongoing improvements producing positive results in the reduction of crime. The transition to a full-time prosecutorial staff in the SAO was also attributed to increased conviction rates.

Dr. McCarthy highlighted positive accomplishments within the Department of Emergency Services including the installation of a new P-25 emergency radio system and the shift to a permanent pension system for eligible volunteer firefighters.

New competitive salary and benefits packages have been put in place for both the Sheriff’s Office and Emergency Services personnel to aid in recruitment and retention of a high-quality workforce in this most critical area.

“Life-long learning is no longer a cute cliché. It is essential in today’s world to keep our economic engine running, as well as ensuring everyone access to the critical technologies and information that are emerging each and every day,” noted McCarthy.

Safe, Healthy & Active Communities
The address included dialog concerning community wellness and the many initiatives being instituted to ensure that all of Cecil County’s citizens have the opportunities to enjoy healthy, active, well-rounded lifestyles.

The Department of Parks and Recreation was recognized for value-added park areas, facilities and county-wide programs including 1,000 new parkland acres, the opening of Brantwood Park, and the installation of three new artificial turf fields, which regionalize program access and increase field use. Additionally, working with CCPS, the county is operating 16 quality, after-school programs, serving 750 elementary students.

The Department of Community Services (DCS), with its broad continuum of community-based programs, continues to upgrade the Cecil Transit system to better facilitate citizen-access and movement throughout the county. Through partnerships with the federal government, victims of crime are being provided with trauma therapy and counseling, and working to combat human trafficking, support job creation and address Cecil’s homeless population.

The county executive continues to support the ‘no-kill’ philosophy of the Animal Services division, where the increase of animals served grows each year.

Perhaps most noteworthy, was the County Executive’s announcement of a proposed tax credit for senior citizens and retired veterans.

“As a result of wisely-invested and appropriately allocated tax dollars, and because of the tremendous commercial and industrial growth within Cecil County, I have directed my staff to prepare a new property tax credit for our eligible senior citizens and retired military, 65 or older,” said McCarthy. “With our Council’s support and approval of the FY2021 budget, this tax credit will be effective with the start of the new fiscal year commencing on July 1, 2020.”

Details of the proposed tax credit are being finalized and will be reported early next week.

While sharing the grand successes during his first term, due to the tremendous support of citizens from all organizations and regions within the County, Dr. McCarthy also recognized that there is still much left to accomplish. He specifically noted the homeless population and the ongoing, significant challenges with the opioid/heroin crisis, evident within the county and across the state and country.

“I will commit to you that I will do everything in my power to keep the momentum moving forward. We will not take our foot off the pedal. While there has been tremendous progress there is still much left to achieve. I am committed to working with you to ensure that Cecil County continues this remarkable ride to success and prosperity,” expressed McCarthy in his closing remarks.

“With a can-do mindset, working collaboratively, we can achieve far more for our citizens.  I will leave you with the wise words of Mahatma Gandhi, ‘the future (our future) depends on what we do in the present.”